The McCrone Report ..Why it was not published for decades.

The McCrone Report ..Why it was not published for decades.

More info on the 30 year rule can be found here
https://en.wikipedia.org/wiki/Thirty-year_rule and here
http://www.nationalarchives.gov.uk/about/our-role/plans-policies-performance-and-projects/our-projects/20-year-rule/

Scottish Nationalists have built a huge conspiracy theory over the McCrone Report over decades to suggest there was some sort of conspiracy by "hiding a secret Oil Report" because it was never made Public which of course it wouldn't have been as it was never a Public Document that was hidden but merely an Internal Civil Service Briefing Document for use within Government and therefore fell under the jurisdiction of the 30 year rule for Government Internal Documents.

The second part of the Scottish Nationalists "Secret Hidden Report " is that McCrone himself said that most of the report was written around the information that had been already published in a Sunday Newspaper over several previous weeks , how can something that that was already published in a Sunday Newspaper ever be "Secret" ?  It clearly cannot be and added that the briefing notes were Civil Service Notes never meant to be published in the first place means nothing could in fact be hidden in the first instance. Simply applying the existing Civil Service rules that exist for all other documents doesn't mean any sort of "cover up" just a continuation of the usual and normal Civil Service process.

You can see McCrone explaining his work here himself on this link and exposes the Scot Nationalists conspiracy theory as stupid invented nonsense.
https://www.youtube.com/watch?v=7C6CMExtQEo&t


Here is the part of the McCrone Report that Nationalists always try to ignore and don't want to highlight or even talk about ..anyone know why not ? 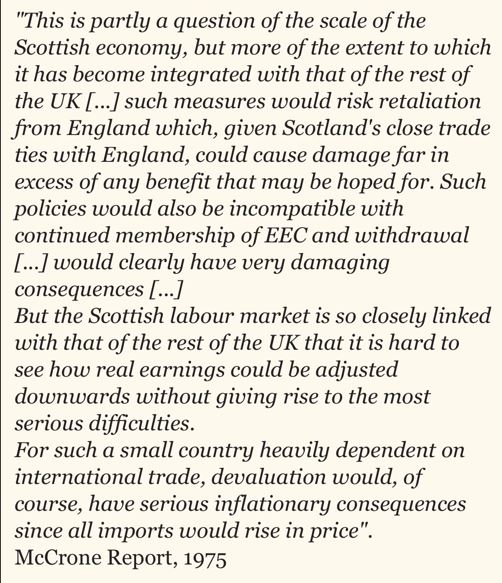 Through a combination of received Oil Revenues and Fiscal Transfers to Scotland's  Spending budget when Oil Revenues were too low to cover Scotland's own spending, 95% of all the North Sea Oil and Gas  revenues recovered has now been received by Scotland in 2013 as explained
in this Oil Report from 2013 here
https://www.scottisheconomywatch.com/brian-ashcrofts-scottish/2013/07/has-scotland-already-spent-its-oil-fund.htm

This is of course now 2019 and with Oil Revenues again being very low Scotland has had another £40bn back to its Spending budget since 2013, the total  now received back being 97.5% of all the Oil Revenues ever produced, if Oil Revenues stay low Scotland will receive another approx. £20bn  back in the next three years meaning that 100% of the North Sea Revenues will have been received by Scotland and any further Fiscal Transfers after that point will be pure bonus's to Scotland for being part of the UK and will add up to huge amounts coming to Scotland in the future as Oil
Revenues in the North Sea slowly diminish with time. 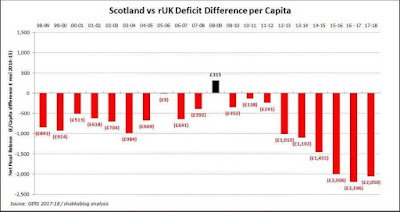